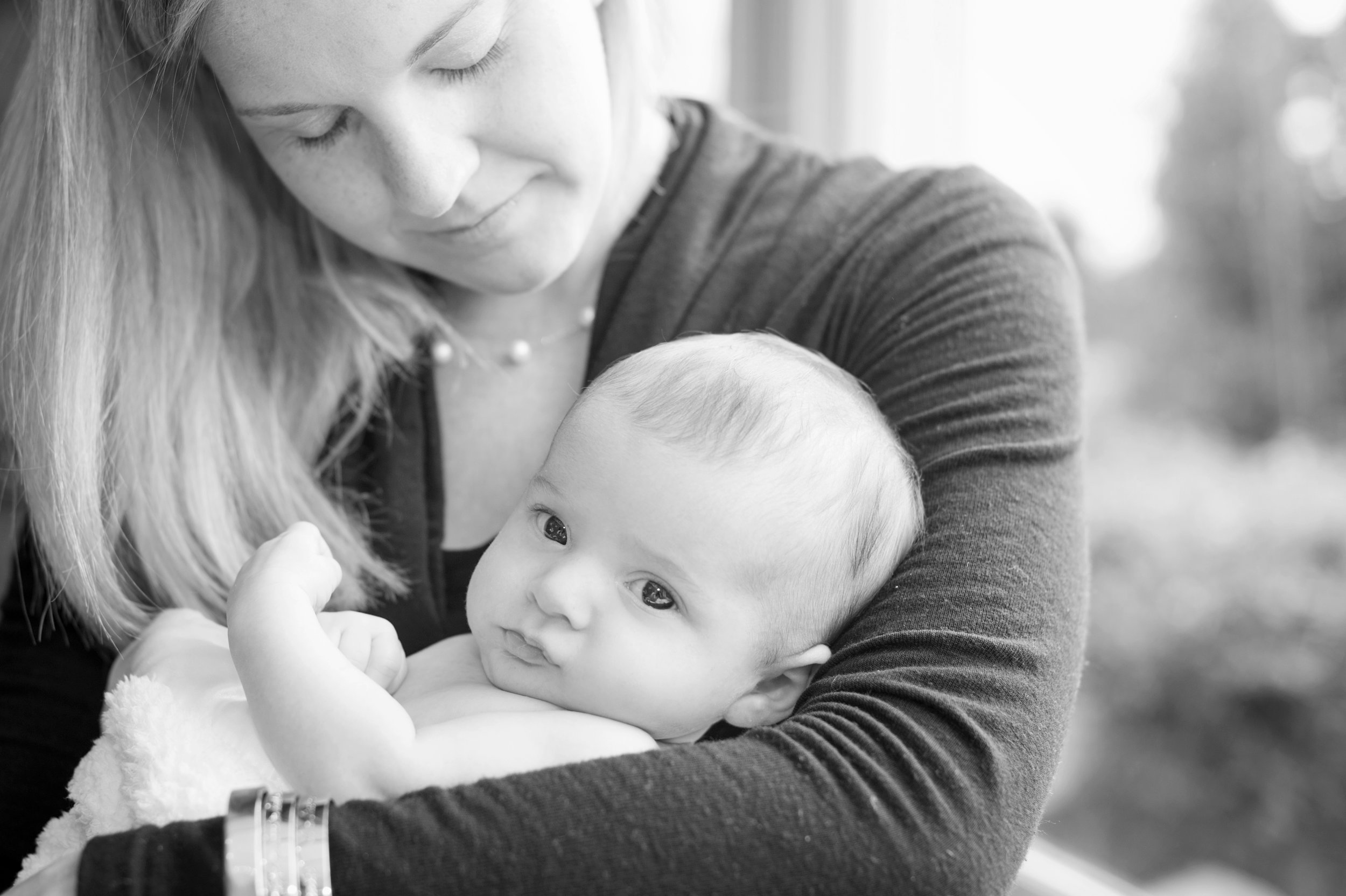 A month after the birth of my daughter Lucy, I found myself locked in the psych ward of the hospital. I spent 10 days there. To say that this was not the start to motherhood that I had dreamed of would be an understatement. I had envisioned pushing my stroller down the street with a huge smile on my face, stopping to casually nurse my daughter, all while looking cute and put together.

Let me take you back to the day my daughter was born. I had a long and intense labor, but the moment my daughter was born and looked into my eyes I felt overwhelming love. I also felt a huge sense of responsibility and an even bigger desire to do everything right and be the best mom I could possibly be.

“The guilt was like a fog that surrounded me, and grew thicker and thicker. “

I felt like a failure because I couldn’t even handle the basic task of feeding my baby. Each time my baby cried, I felt like this was proof that I wasn’t cutting it as a mom. I felt incapable, needy, and overwhelmed. It was devastating to feel like I was unable to play this important role that I had dreamed about fulfilling since I was a little girl. The guilt was like a fog that surrounded me, and grew thicker and thicker.

Meanwhile, the postpartum adrenaline was wearing off, and exhaustion was setting in. But despite my own physical state, at the instruction of my daughter’s pediatrician, I began an around-the-clock nursing and pumping schedule. I was to nurse my daughter every two hours, pump, and then feed her the expressed milk. This grueling schedule started to muddle my mind into a state of confusion. I remember freaking out in the middle of the night, thinking my eye mask was actually my daughter in bed with us, and I had somehow fallen asleep with her in bed and then rolled over on her. (She was in fact sleeping soundly in her bassinet.)

Another night, when I was trying to put together my breast pump parts, I couldn’t figure out how they were supposed to go together, even though I had used them dozens of times already.

“As my thoughts became increasingly more terrifying and dark, so did my own paranoia.”

Even though my family was around to help in these first few weeks, I couldn’t let my guard down and rest. I was hyper-vigilant and protective of our daughter, and I was both anxious taking care of her — fearing I’d do a bad job — and also anxious if she was out of sight. When others were around to help with my daughter, I couldn’t unwind and get rest even though I desperately needed sleep.

We even hired a night nanny, but sleep still eluded me. I felt like I had stuck my finger into an electrical outlet and I couldn’t access my internal “off” button. Each time I tried to lay down to rest, my thoughts came fast and furious, making it impossible to fall asleep. The thought ticker tape in my mind started playing, and then replaying, disaster scenarios. As my thoughts became increasingly more terrifying and dark, so did my own paranoia. I felt so unsafe, while alone with my thoughts, that at one point I didn’t sleep for three days straight. This downward spiral continued until, ultimately — I lost touch with reality.

I was convinced that the police were coming to haul me off to jail for a crime I didn’t commit. I thought our house had been bugged and there were spy cameras watching my every move. I thought my cell phone was recording me at all times, that the baby monitor was hacked and that people were speaking to me in codes. I of course didn’t tell anyone this because then they would have thought that I was crazy. And vocalizing what was going on inside my head would mean acknowledging to myself that something was terribly wrong. And that certainly didn’t feel safe, either.

At this point, my family had become concerned about my erratic behavior, and made me an appointment with a therapist. Yet when I showed up for that appointment (which was just a few days before I ended up being hospitalized), I couldn’t even write down my own date of birth or address.

My cognitive function was severely limited at that point, so now in addition to feeling terrified and inadequate, I also felt “stupid.” Which for someone who has always prided herself in her education, smarts, and “I can figure anything out” attitude, was extremely alarming.

Did I mention that, professionally I was an executive coach and mindfulness teacher? Just weeks prior, people had been paying me to teach them about mental fitness and wellbeing. Flash forward to me now being the mindfulness teacher who had lost her mind. This temporary madness quickly became a threat to everything on which my own self worth had been based.  I felt myself spiraling more and more out of control and into despair.

All I knew was that I had lost my mind, and that if I had lost my mind, then my life wasn’t worth living. Telling my husband and mother about my plans to jump off the Golden Gate Bridge in San Francisco is what landed me in the psych ward, but also what ultimately started my road to recovery.

Thankfully, I got the help I needed in a variety of forms, including medication, therapy, family support, meditation, sleep, running, yoga, self-care, self-compassion, acupuncture, and naturopathic medicine over the next year.  Within five months, I was back to work and teaching workshops again. Within nine months, I had weaned off of all of my medications. I’ve continued to get supported through talk therapy over the five years since I was hospitalized.  I continue to prioritize myself and my wellbeing each day even though I’m not in a crisis anymore. I make time to meditate and exercise daily, and most nights I get eight hours of sleep. I made a complete recovery and am not only better, but so much stronger and more resilient than ever before.

I thought initially that this would be a secret I’d take to the grave, but as I got better, and worked through things in therapy, I started to realize the wisdom of this quote by PHD and author Brene Brown.

I desperately wanted to create a new ending to my story. “Mom who spent time in the psych ward and then was ashamed and embarrassed about it for the rest of her life,” wasn’t going to cut it.

I needed to create something positive from this challenge so that it could make sense in the narrative of my life. I felt like if I could help just one new mom feel less alone by sharing my story, then it would be worth it.  I felt called to do what I could to reduce the stigma around maternal mental health disorders, and to let other moms know that this illness is treatable and temporary. If one life could be saved, because someone suffering from postpartum psychosis got help right away, it would be worth it.

This inspired me to start speaking about my experience. I remember feeling like I was going to throw up when I shared my first Medium post to Facebook. I was a ball of nerves and I’ve never felt so vulnerable and exposed. It was no easy feat to overcome that fear and share my story, yet when I did, the response was incredible. All of a sudden, sharing my story went from being really scary to being incredibly healing.

Then I began writing more and speaking with mental health advocates. And at one point I was invited to do a TEDx talk, where I broadcasted awareness to many thousands of people. In my TEDx talk I share five things that I want all moms who are suffering with a maternal mental health disorder to know. I want to share these with you today too.

If you or someone you love needs help, this post (follow link) can help you figure out where to start.

NPR Radio Interview: She Strived to Be the Perfect Mom and Landed in the Psych Ward

Mom Group in your Inbox?

It’s a thing. Come get some.